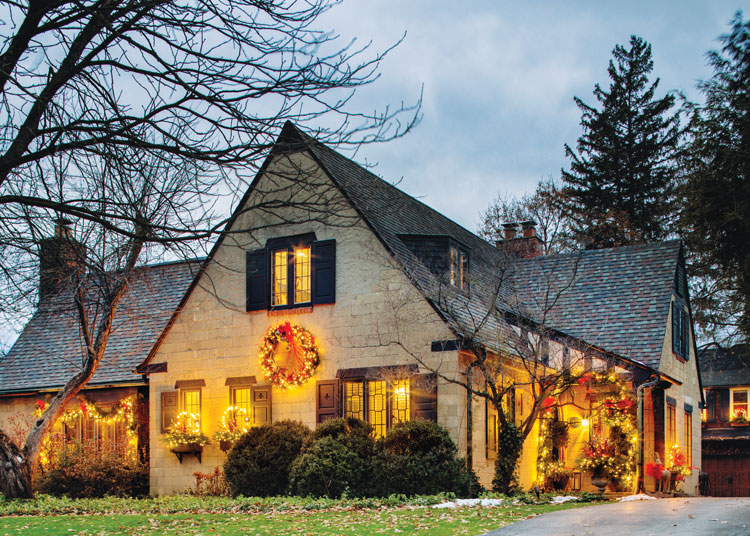 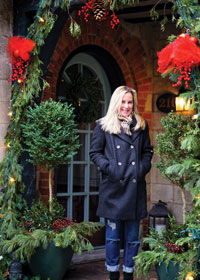 BACKSTORY: Come the holiday season, Christine Harriss decks the halls in and around her French Country Tudor-style house in Birmingham, where she and her husband have lived since 2000. Dating to the early 1920s, the stately residence goes festive in a tasteful way, thanks to a collaboration between Harriss and one of her creative friends. “He and I share the same taste,” she says. “It’s fairly monochromatic with little pops of color, which is something I really like.” With a background in advertising, Harriss, who currently does styling and some interior design work, has a knack for artistic flourishes that emphasize her home’s elegant architecture.

ENDURING DÉCOR: The talented design duo likes to enhance the existing splendor of the classic home, while keeping its integrity intact. Festive embellishments that set a celebratory tone feature timeless touches such as white lights and seasonal greens.

CONTAIN YOURSELF: Outdoor planters filled with topiaries, as well as other fresh and dried materials like spray-painted twigs, signal the holiday season. “There’s a lot of attention to detail,” Harriss says.

MAKE A STATEMENT: A massive wreath from Eastern Market (the only faux greenery), gets dressed for the occasion without going overboard. Subtle touches include combining pine cones and berries with red taffeta.

UNEXPECTED ELEMENTS: The classic carriage house acts as a natural extension for the joyful tone of the main home. Although window boxes may be synonymous with warmer weather, they take on a new persona when filled with seasonal décor. A simple mix of red berries, ribbon, and taffeta bows is all that’s needed to spread some holiday cheer.

GOODNESS AND LIGHT: Candles and lanterns light the way during the couple’s holiday celebrations. Distinctive details like these influence the interiors, where Harriss weaves organic components through the rooms. “I take cues from outside and move them inside,” she says. For instance, an antique iron chandelier in the kitchen dons a garland at this spirited time of year.

THE REAL DEAL: A garland of natural greens near the front door follows the curve of the brick archway that accentuates the home’s entrance. When a backdrop has so much to offer, all that’s needed to send a seasonal message are a few key pieces.

MERRY AND BRIGHT: Even though Harriss’ taste is pretty traditional, she’s not averse to a lighthearted twist. A little whimsy goes a long way in the form of red taffeta bows that accent garden statues in the winter, like the deer shown here. A dog statue in the back of the house sports the same adornment. 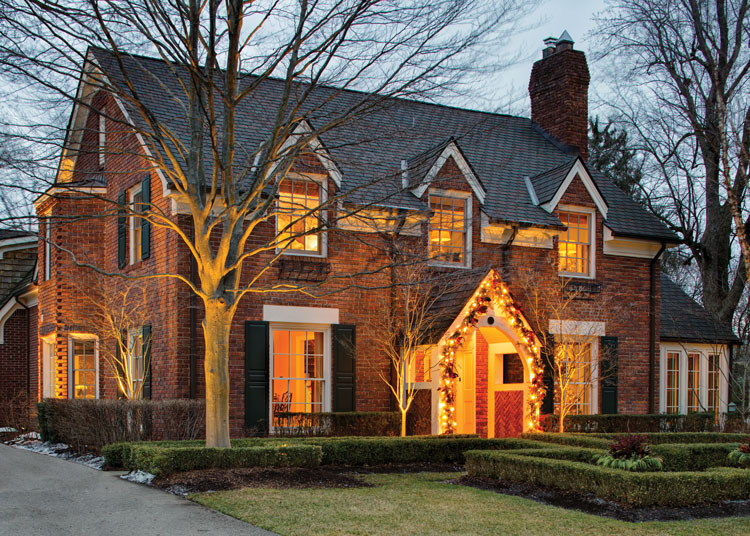 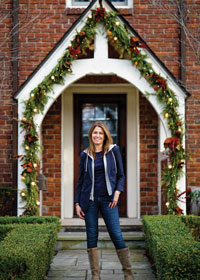 BACKSTORY: Interior designer Lynn Witmer and her husband, David Hirsch, purchased their Bloomfield Hills home (constructed in the 1930s) 10 years ago. “What drew us to it was its English country manor feel,” says Witmer, owner of Bloomfield Hills-based Witmer Design, “and we particularly loved the pointed wooden structure that surrounds the front door.” When it comes to the holiday season, Witmer likes to decorate with natural elements. “We like to do something a little different each year, but always use all-natural materials and have a garland on the arch by the front door. And we always integrate the arch materials with the urn materials,” Witmer says.

BERRY NICE: Witmer opts to use a very long garland to adorn the wooden structure around her front door. It’s comprised of fresh pine mixed with boxwood, cyprus, magnolia leaves, and lots of ilex (winter red berries that are part of the holly family).

SHE’S URNED IT: On each side of Witmer’s bluestone front walk, two large, pale gray concrete urns sit inside the boxwood hedges. To echo the materials in the front door’s garland, each urn brims with pine, boxwood, and ilex.

SANTA’S DOOR: On the north side of the home, four iron urns filled with boxwood topiaries adorn either side of a white wooden door. “We’ve always called this the ‘Santa door,’ ” Witmer says. “The décor here is more whimsical than it is in front of the house.”

NO. 1 ELF: All of the home’s holiday décor was designed and installed by Rebecca Beausoleil of Moditional Designs of Royal Oak.

HELLO, HALO!: Once Inside the home, guests immediately see a pair of plaster angels in the foyer (not shown), each one 5 feet high and holding a ceramic shell for holy water. “They came from a church in Europe and David gave them to me as a gift right after the birth of our second daughter 12 years ago. They represent my two girls,” Witmer says. “We decorate them appropriately for each season. At Christmas they wear Santa hats, and on birthdays they hold balloons.”

INSIDE INFO: Lynn and David’s two daughters are in charge of decorating the sunroom Christmas tree. A more formal tree, placed in the living room, features natural decorations including feather garlands and pine cones, as well as a mixture of brown, blue, and lime green ball-shaped ornaments. “I don’t decorate with traditional red or green inside,” Witmer says. “Instead, I like to keep it in context with the interior design of the house.” 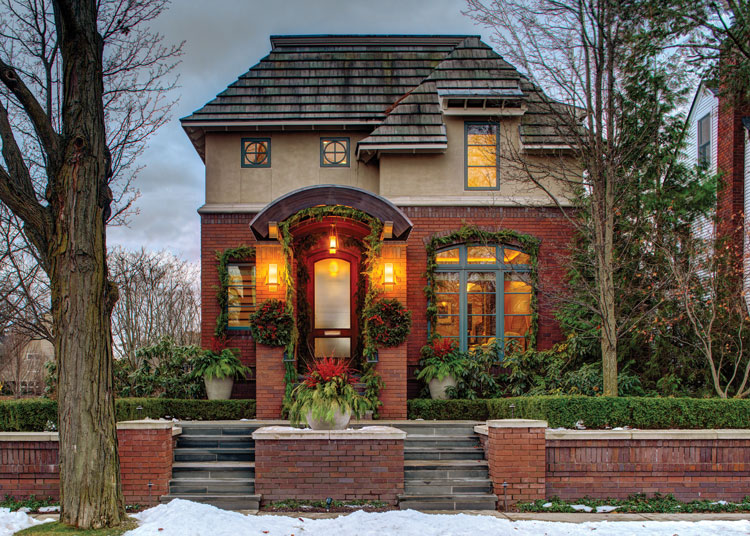 BACKSTORY: Lynn Witmer’s mother, Pat Witmer, below, lives just a few miles away from her daughter. Like Lynn, Pat entrusts the design and installation of her home’s Christmas decor to Rebecca Beausoleil, owner of Moditional Designs in Royal Oak. Pat purchased her 15-year-old contemporary Birmingham home in 2014.

CIRCLE TIME: Two large wreaths hang from the handsome brick and metal archway that stands guard in front of the door. Made out of pine, pine cones, ilex (winter-red berries), and magnolia leaves, the wreaths are 32 inches in diameter.

HOLLY LOWDOWN: Holly — more specifically the European holly, Ilex aquifolium — is commonly referenced at Christmastime, and is sometimes referred to by the name Christ’s thorn. In many Western Christian cultures, holly is traditionally used in wreaths and illustrations, such as on Christmas cards. It is said that since medieval times the plant has carried Christian symbolism.

SOUTHERN TOUCH: “Magnolia leaves are glossy green on one side and a burnt orangey brown on the other side. Grown only in the South, they feel like suede,” Beausoleil says.

SIMPLICITY WINS: “I don’t add ribbons to the wreaths because I don’t think they add much,” Pat says.

POT LUCK: At the very front of the home, in between the double set of stone steps, a stone pot filled with cascading pine fronds and dozens of tiny red berries rests on top of a chunky red brick cube.

STATES OF THE UNION: During the 60- plus years Pat Witmer and her late husband, Jack, were married, they lived in nine different states. “The state you lived in sometimes determined what you could use for your Christmas decorations,” the Birmingham resident says. “For example, I always preferred to use real trees, but in Arizona and California you need to mix a lot of artificial with the real because of the temperatures. Putting pine out in the hot sun dries it out. It’s a pleasure to be back here in the colder weather and to be able to use everything that’s natural and real.”

NEIGHBORHOOD VERDICT: “Everybody who walks by the house stops to look at the décor, comments on it, and then gives it a thumbs-up. Once I’ve found something that looks good, I like to repeat it year after year,” Pat says.