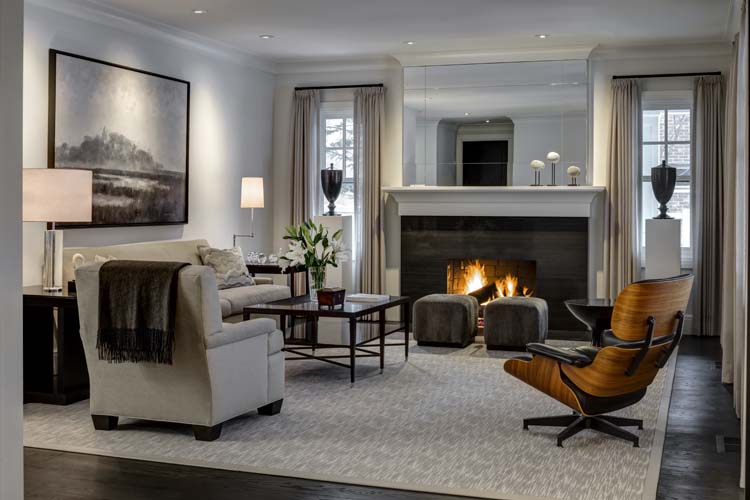 It was just an average bungalow, probably built in the late 1940s. But it had enviable attributes that appealed to the young family who purchased it in the summer of 2015. “It was a big lot, they could walk to downtown Birmingham, and the price was right,” says Livonia-based architect James Blain, of James Blain & Associates. “I knew we could make it something special.”

Blain’s vision included respecting the original 1,500-square-foot, 1.5-story home’s modest footprint, as well as the lot’s mature trees. Instead of an average bungalow, he saw a four-bedroom, four-and-a-half-bath contemporary Cape Cod that made the most of the lot and the light.

Luckily, the homeowners had complete faith in him, as well as in interior designer Kevin Serba, of Birmingham-based Serba Interiors, and project manager Joe Tasch, of Bloomfield Hills’ Thomas Sebold & Associates/TSA, the team the architect assembled to collaborate on the renovation. “The homeowners knew what I do and what Kevin does, and they relied on us,” Blain says. “They’re low-key people.”

A wide, wraparound porch was a major exterior improvement. White columns contrast with dark trim on the windows, and tan-colored natural wood shingles are true to the home’s East Coast inspiration. “The original house was a little plain,” Blain admits, “and it was just too small for a modern family.”

Ironically, Serba had noticed the home’s possibilities even before he was enlisted to help with the project. “I watched it when it came on the market,” he says. “I remember thinking it would be a good project for me.”

The homeowners, architect, and designer shared their goals for the house, including “creating an unassuming family home that had an open floor plan and modern conveniences — a space that (would be) functional as well as beautiful,” Serba says.

The team juggled interior rooms as part of the renovation, converting a bedroom near the front door to a handsome office and upgrading the original living room with a resurfaced fireplace. Unusual roof lines and unexpected window shapes throughout draw attention to the interior architecture. “I like high windows, so that when you look out you don’t see another house,” Blain says. “The new rooms have a ton of character.”

Serba’s goal for the interior was “to create a modern mix, one that had a comfortable feel with a combination of textures and styles,” he explains. “The client likes contemporary things, so I combined contemporary and abstract art with some vintage and antique pieces that, while unique, work well together.”

For him, the project was all about finding balance. “The house is warm yet contemporary, because of the combination of rich textures with clean and simple backgrounds,” he says. “I mixed warm gray and beige tones in the soft furnishings and drapery, and opted for rich wood tones and painted furniture over chrome or metal accents. I tried to balance the contemporary art by adding rustic textures in the family room cocktail table, and (using) accents like the antique Chinese screens as wall art.”

The palette is urban and sophisticated yet warm, Serba adds. One of his challenges was making the large, open spaces feel comfortable and cozy. He achieved that with a wide-plank, deeper-toned floor to anchor the tall ceilings. “I also selected warm neutral backgrounds in area rugs, upholstery, and draperies, to soften each room visually and texturally,” Serba says.

The tall, angled ceilings distinguish the once-average home from the many others Serba has worked on in the area. He played off that special feature in various design elements throughout the house, including the family room’s fireplace mantel and custom cocktail table, which mimic the geometry of the room’s tall ceiling peaks. Open to the new kitchen, the sunny family room provides a stylish family space.

Upstairs, the same irregular roof lines result in high-peaked ceilings that make even small rooms feel spacious. “We had a lot of meetings while the house was being renovated,” Blain says. “I was here almost every day.” Because there’s no attic, the second-floor ceilings reflect the angled shape of the roof, resulting in anything-but-boxy bedrooms. “Getting the rooms into the roof was a challenge,” says the architect, who adds that seemingly simple spaces can be among the most difficult to design and build. “The carpenters had a lot to figure out. At first it was tough to understand the space and how it worked, but we kept chugging along every day.”

Eighteen months later, the project’s challenges are far behind them, Blain says. So, too, is the once-average home, replaced by what the architect calls “a sophisticated, contemporary tweak on a classic Cape Cod.”

“It was touch and go, and for a while we weren’t sure how it would all turn out,” Blain says, “but today, walking through the house, it’s just one interesting and beautiful room after the next. We’re all thrilled with the results.”