Baths 1 & 2: Sophistication in the Country

Two baths in a Metamora home flow with style 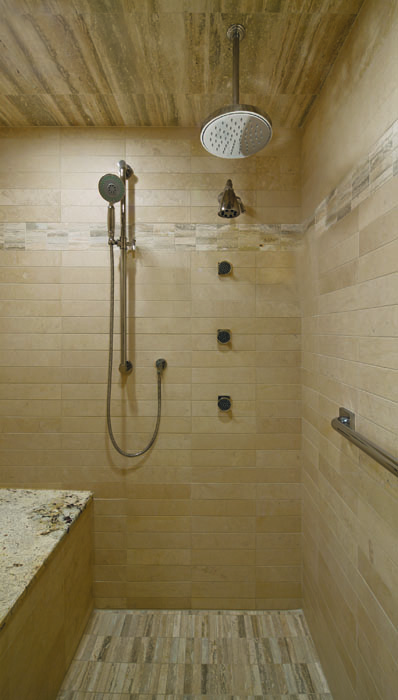 Originally constructed as a log cabin in 1917, this totally renovated home sits pretty on one of the highest points in Metamora. (When the home was described in an article that appeared in American Home magazine in 1943, the writer coined Metamora “The Michigan Berkshires.”)

DESIGNER’S CHALLENGE
“In the master bathroom, both the window configuration and the lighting were a challenge,” Synnestvedt says. “It was important to make sure the client had enough light while still maintaining the master suite’s subtle and soft elegance, so we used Hudson Valley hanging fixtures that have frosted glass globes and also added low-level LED floor lighting and walkway lighting that is motion-sensitive,” Synnestvedt says. In the guest bath, the tile’s pattern offered a challenge. “The homeowner wanted to incorporate all the colors of the sea into this bathroom. She fell in love with the samples we showed her and was determined to use them all,” the designer says. “I was concerned about the bathroom appearing too busy with pattern, but by keeping the cabinetry, accessories and other elements simple, I think it worked.”

WASH AND WEAR
The conveniently located washer and dryer are cleverly hidden behind two sets of stained walnut doors. 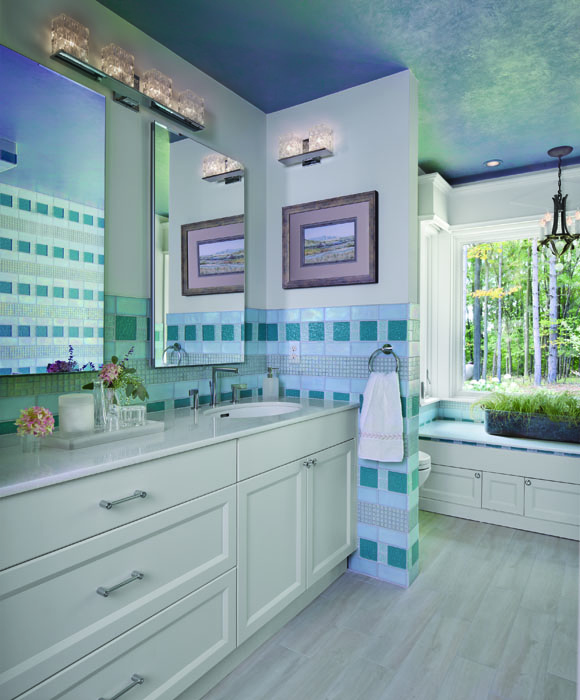 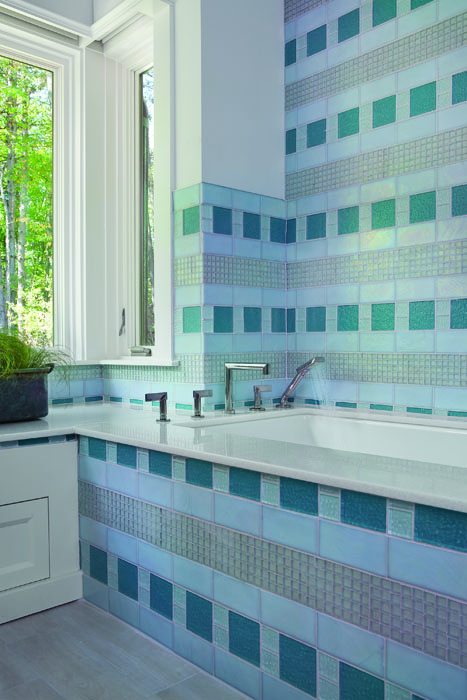 TOP BRASS
Drawer knobs and door pulls were custom-made by Colonial Bronze. All are made of solid brass, which was then plated in chrome, and all feature a diamond knurled pattern that was created on a special machine.

SOAP OPERA
A honed limestone uber shower includes a rain showerhead, body sprayer, regular and hand-held showerheads, and a built-in seat. Best of all, the controls for each component have been placed at the entry so you don’t get wet while turning them on.

SEASIDE SERENITY
The owners requested “sea colors” for the guest bath, so designer Jane Synnestvedt utilized four Ann Sacks tile designs — some milky, some iridescent, some clear, and all in shades of blue.

SPARKLE PLENTY
Because the lady of the house loves what Synnestvedt calls “sparkles,” all of the bathroom’s Almo Creations hardware (knobs and towel racks) are made of Swarovski crystals. The hand-forged iron chandelier that hangs from the ceiling has shiny rock crystal drops.

PAINT PANACHE
Using a rag and brush, and Modern Masters artist paints, faux finish painter Laurie Manny, of Royal Oak, used three different layers of paint on the ceiling. The iridescent layer was inspired by the iridescent tiles used for the backsplash.

(See story on the kitchen in this home in this section’s “Kitchen 2.”)

BACKSTORY
Interior designer Toby Sneider, owner of Sneider Custom Interiors of  West Bloomfield, visualized stunning yet functional bathrooms (including the powder room and master bath) for this Bloomfield Hills home. The results? She describes the powder room, which features Sneider’s custom-designed vanity (fabricated by Designer Furniture Services in Pontiac), as “sophisticated with a touch of whimsy.” As for the master bath, it’s “open and airy,” staying in tune with the transitional feel of the home.

DESIGNER’S CHALLENGE
Keeping things low-maintenance for the homeowners was one of Sneider’s main goals. To achieve that result, she incorporated practical features like nonslip floors in the master bath and a wipeable wallcovering in the powder room.

SEEING RED
“I used traditional ornamentation, escutcheons, and linear cup pulls all in polished nickel on a red lacquer finish for the vanity,” interior designer Toby Sneider says. The lady of the house says she loves the “uniqueness” of this piece. 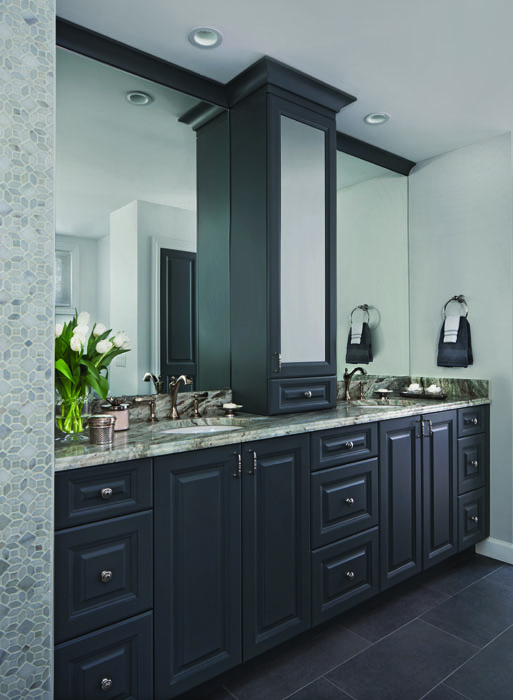 MARVELOUS MARBLE
A gray-and-white marble countertop adds another special touch to the room.

PRACTICALITY Plus
The wallcovering, with a small damask pattern, is “very wipeable,” Sneider says. “It’s a useful bathroom,” she adds, “still dramatic, but maintenance-free.”

WALK-IN WONDER
Sneider notes that “you can walk right into the master bath from the closet space,” making the entire master suite very transitional for the homeowners. A Carrara and Thassos mosaic feature wall in the shower wraps around to meet the painted and glazed double vanity. It “really pops,” Sneider says. A lady’s dressing table, fabricated in the same finish, is just outside the bathroom in an area that leads to his-and-hers closets.

CLEAN COLOR SCHEME
There are pops of red throughout the home, bu the palette for the master bath was kept to grays and whites to give the room a clean and soothing feel.

DOUBLE-DUTY
Nonslip porcelain floors are both stylish and functional. “(The flooring) is durable and has a nonslip texture to it,” Sneider says.

SEAMLESS SHOWER
“I love the fact that it’s seamless,” Sneider says of the “curbless” shower. Its heads, sprays, hoses, and grab bar were deliberately placed a specific way. “We made it look like an art wall,” Sneider explains. “It (made it) balanced, so it looks like a display.”

(See story on the kitchen in this home in this section’s “Kitchen 4.”)

BACKSTORY
When interior designer Staci Meyers, of S|A|M Interiors of Bloomfield Hills, started working on the interiors of a mid-century modern home in November 2013, her first thought was that although the house was fantastic in many ways, its layout wasn’t efficient. “It’s a cool house; I was jealous that I didn’t find this myself,” Meyers says with a laugh. “It’s private, and the property is beautiful.”

Janine Flaccavento and her husband, Scott Reid, moved into the Bloomfield Hills home from Toronto. “We were excited to see (so many) mid-century homes in the Detroit area,” says Flaccavento, who works in the advertising industry, as does her husband. “To be able to remodel this home while keeping so many of the original features — the built-ins, the wood trim, the lines — it was a fantastic project.”

DESIGNER’S CHALLENGE
The couple needed a powder room for guests and a bathroom for their young school-age son, Declan. Although a beautiful powder room now is part of the layout, it once was a full bathroom and it shared a wall with another full bathroom that had a closet (removed to open the space). “We kept the plumbing wall and made a child’s bathroom and a powder room,” Meyers explains. “People no longer have to traipse through bedrooms to use a bathroom.”

SHELF LIFE
The homeowners wanted glass shelving in the powder room, to display their collection of art pieces.

OH, CANADA
The cabinetry/sink is the Myth model with a Gray Oak finish, from Ginger’s in Toronto. “It’s well-made,” designer Staci Meyers says.

FLOOR WITH AN EDGE
Ceramic tiles from Ciot are 24-by-48 inches, and have the look of concrete, which was one of the owners’ goals. Called Concrete Project, “They have the feel/look of concrete without the issue of maintenance,” Meyers says.

SPECIAL TOUCHES
The flooring and cabinetry are the same make as found in the powder room (here, it’s the Outline model in a Gray Oak color), and the wall storage is “Cascade,” from Ginger’s, Toronto. A Kohler faucet, soft-close drawers, and Blum hardware add to the appeal. The lights are similar to those used in the powder room. Recessed lighting above the vanity keeps you from “looking tired and old,” the designer says. Meyers also is big on floating vanities, “so you can turn all the other lights off and the light beneath serves as a nightlight. It creates drama.”

COLOR SPRITZ
A nice accent color for gray is green, right down to the apple green towels.

MIRROR, MIRROR
The Mirage mirror, with a Gray Oak finish, is from Ginger’s, Toronto.

FLORAL FINISH
“I like working with succulents and orchids — they’re simple and architectural in form,” Meyers says.

(See story on the kitchen in this home in this section’s “Kitchen 6.”)