Last year, just after the renovation team put the finishing touches on the pretty 1888 cottage that sits next to Grand Hotel on Mackinac Island, it’s a sure bet that many toasted to the home’s bright future. The beverage of choice for that toast would have to have been beer, of course, as the cottage was once owned by the beer-making Stroh family and is lovingly referred to as Stroh Cottage to this day.

Serendipitously, there were other families  (noted in Historic Cottages of Mackinac Island, Arbutus Press) through the years associated with the brewery business that also summered in this cottage, located on the idyllic Upper Peninsula island.

The original owner, Walter Cass Newberry, sold hops in Detroit and Chicago from 1857 until his retirement. When not peddling beer ingredients, Walter and his wife, Harriet, traveled to Mackinac Island regularly with their daughters, Mary and Jessica. The family undoubtedly enjoyed several years of vacationing at a home that offers some of the best straits-area views on the island. 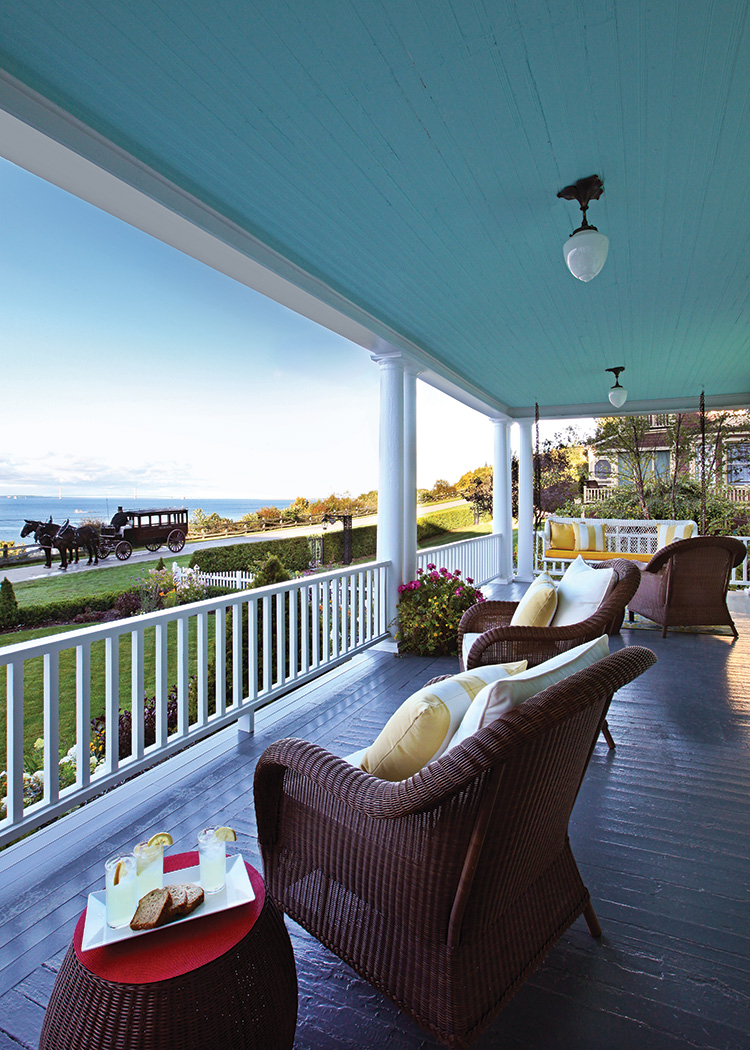 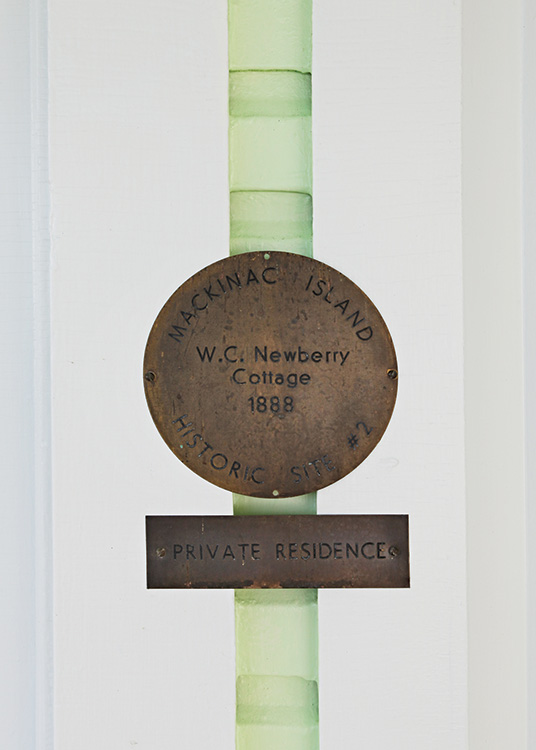 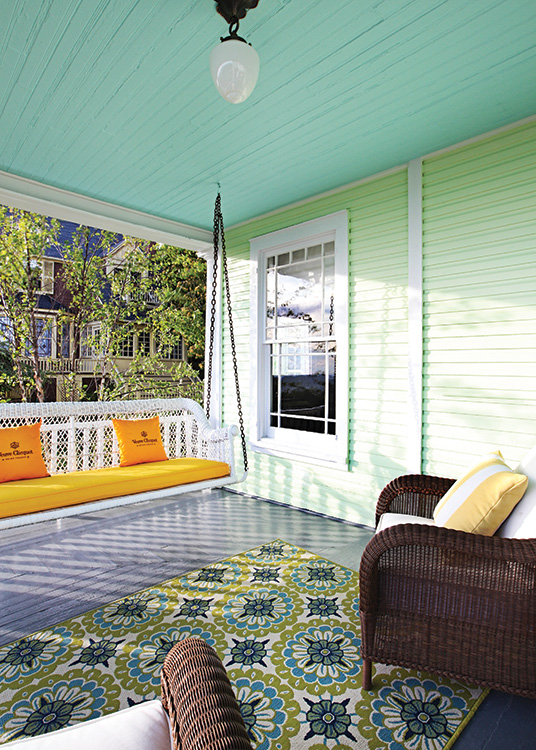 Left: A sky-blue porch ceiling was a popular color choice for the Victorians — the tradition continues. Wicker furniture and a colorful rug invite one to sit awhile. Middle: Intriguing moldings and a cheerful color palette adorn the home. Right: Residents and guests enjoy watching boat traffic, cyclists, and passing horse carriages from this relaxing vantage point.

In 1913, Julius Stroh, a brewmaster from Detroit, acquired the cottage and made many changes. Most visible was an addition to the rear, which doubled the cottage’s size. In 1937, Stroh sold the cottage to his friend and business associate, Armin Rickel, who was owner and president of Rickel Malt Co. of Detroit. The family that owned the cottage before it was most recently purchased also traces its lineage back to the beer industry.

While many families have come and gone, what’s remained the same is the home’s original cottage-style footprint, its large veranda, the walls upon walls of beadboard, the fantastic million-dollar views of the straits, and, of course, its location next to the majestic Grand Hotel. Its location, in fact, is the main reason why the cottage is now in the hands of the Grand. 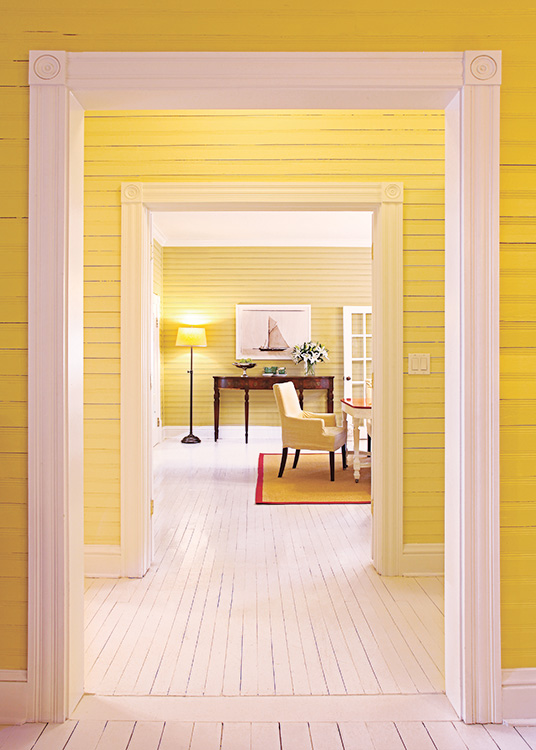 The Charms of Beadboard
Stroh Cottage is a veritable showhouse of beadboard, that old-fashioned paneling that features narrow panels of wood that evoke charming and casual lakeside homes, New England inns, and 1920s abodes. Today, when one thinks of or sees beadboard, the one word that comes to mind is “cottage.” Sometimes called wainscotting or sheathing, beadboard was a decorative treatment that was common during the time Stroh Cottage was built. It remained popular into the 1930s, especially in kitchens. Beadboard’s characteristics usually include being milled with a tongue on one side and a groove on the other, so the boards fit together. Beadboard also often incorporates one or more half-round beads milled into the finished surface — thus the name, beadboard.

The stately, world-renowned hotel, which dates back to 1886, purchased the cottage two winters ago. “We are honored to be the next caretaker of the lovely cottage that the multi-generational Mackinac family, the Porters, cared for and called their summer home and, later, their year-round home for so many years,” says Grand Hotel President Dan Musser III, who bought the home. Ken Hayward, executive vice president and managing director of the hotel, now lives in the home with his wife, Nancy, and children.

The overhaul began approximately the first of November and was completed by the first weekend in May 2013, recalls Hayward.

The team first attended to the foundation, which was worked upon during most of the summer of 2012. During the fall of that year, while the verdant green leaves on the hardwood trees out back turned gold, russet and orange, Stroh Cottage underwent an extensive renovation that would soon reveal rooms awash in melons, purples, mints, and yellows as bright as the blooms in the surrounding gardens. 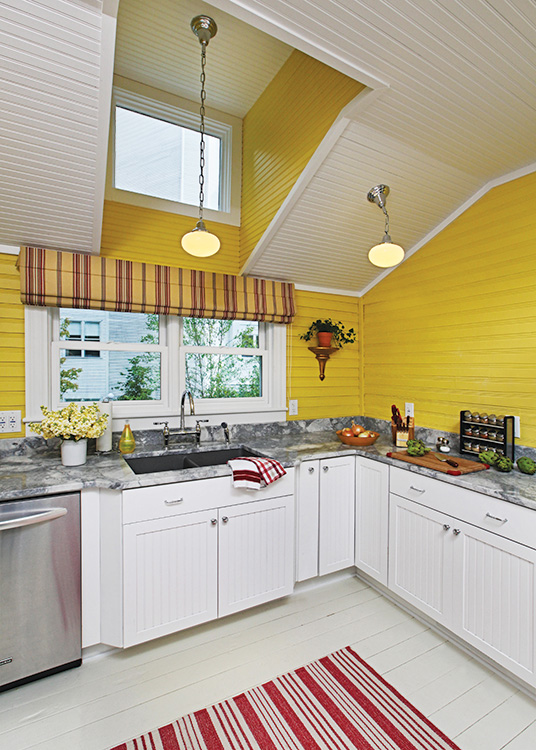 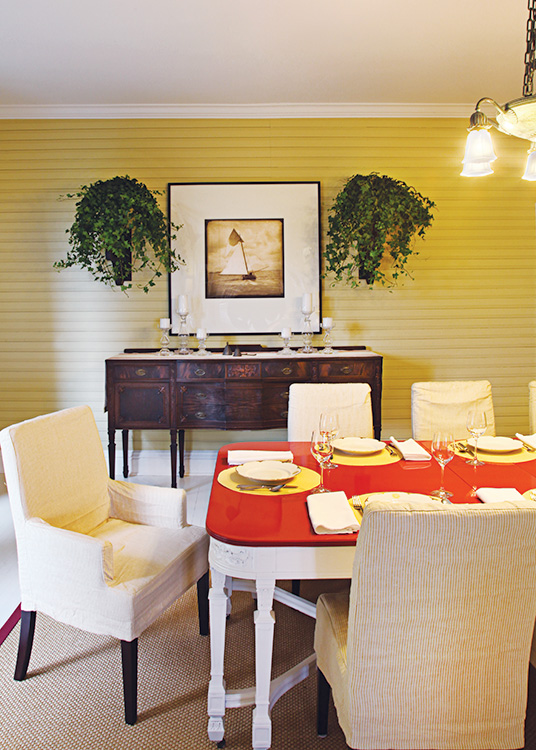 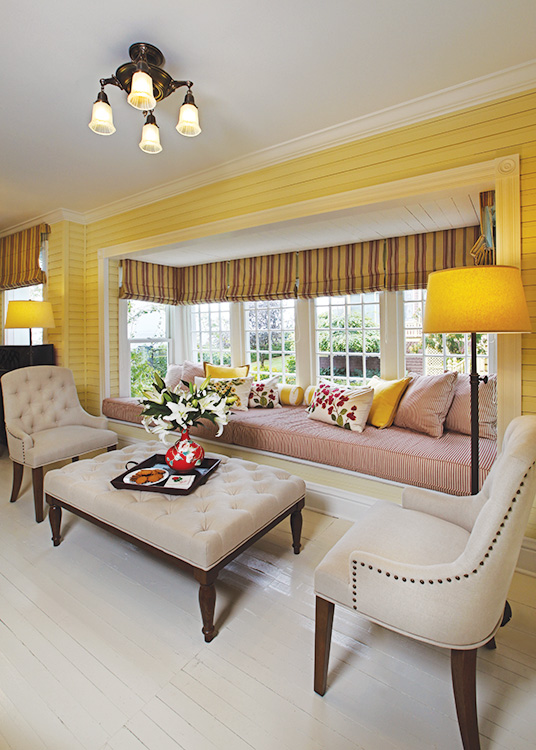 Renovators and painters brought out the charm in this kitchen, which features various sloped ceilings and interesting angles. Reds and yellows play off each other well, providing a classic cottage feel. Middle: The off-kitchen bar, in “geranium,” echoes the many geraniums (the Grand Hotel’s signature flower) along the hotel’s porch and beyond.

For the exterior color, renowned designer Carleton Varney (who also has been the Grand’s interior designer since 1979 and decorated the entire hotel) selected a summery, light green as refreshing as a mouth-watering slice of key lime pie. The color, custom made by Pratt & Lambert, is “officially cataloged as Grand Hotel Mint/Stroh Cottage,” Hayward says. A local general contractor, Andy McGreevy, redesigned the stairways and moved doorways. He also worked with the hotel’s maintenance crew, Gamble Construction, and local electricians, plumbers, and painters. The exterior painting was done by the island’s St. Onge Latex & Groove. Major work included moving and removing walls and doorways, performing bathroom overhauls, creating a master closet from a bedroom, and moving the back staircase. In addition, new heat and air conditioning systems were installed.

The kitchen — a main gathering spot for the Haywards and their college-age kids — was designed by McGreevy, along with help from Brianna Ellis of Pickford Building Center. “Brianna consulted with Andy, Nancy (Hayward’s wife), and me on the kitchen design, and then did the cupboards and counters,” Hayward recalls. “It’s funny how people always congregate here. The open layout lends itself to gathering here in early mornings over coffee, or after meals in the evening.” Modern-day appliances from KitchenAid make entertaining a breeze.

On any given day, Hayward and his team might be hosting Grand Hotel staff or business associates. Visitors also might find Hayward’s daughter, Alexandra, or son, Zach, and their friends lounging in the sunny reading nook just off the living room — perhaps finding it hard to concentrate thanks to the captivating waters beyond. The majestic Mackinac Bridge beckons to the west, while at the foot of the cliffs out front, the Straits of Mackinac, where lakes Michigan and Huron meet, splash the shoreline. 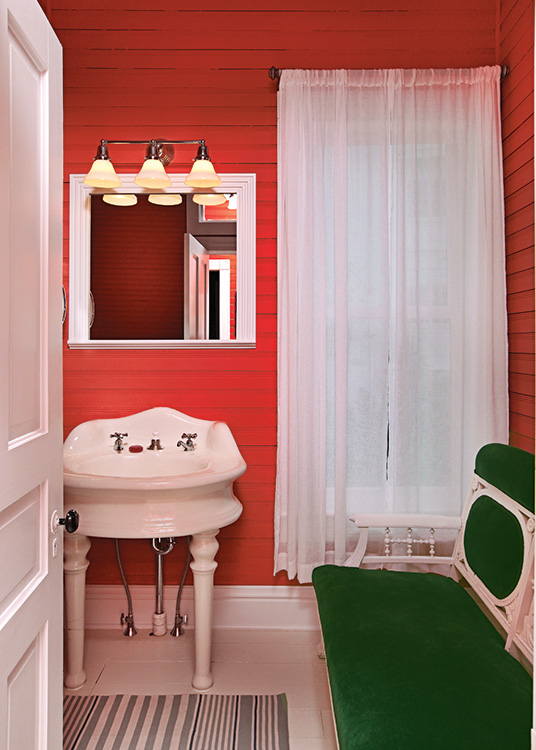 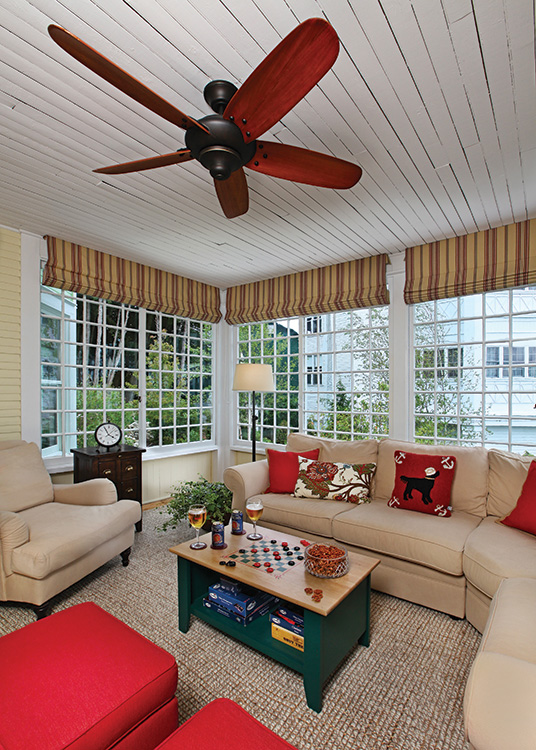 As for interior décor, it’s all about comfort. Mimi Cunningham, Musser’s sister and the facility’s vice president, who oversees the hotel’s shops (gifts, clothing and flowers, including Margaret’s Garden); Mary Beth Daniels, vice president of Convention Services; and the Haywards chose many of the fabrics, furnishings, and paint colors. Alexandra wanted a purple bedroom, so purple it was, saturating walls, bedding, and more. Two designers from Pottery Barn provided assistance, based on floor plans and pictures the renovation team sent them.

“Without doubt, my favorite spot is on the porch overlooking the straits and bridge,” says Hayward, whose dog, Coach, also likes to take in the views. “While the home has been redone, it still has the look and feel of a classic, historic Mackinac cottage, but with the modern amenities of the world today.”

The photo shows how the cottage looked decades ago. Note the stairs’ angle. Today, the stairs come straight down from the porch, rather than from the side. The landscaping is now enhanced with dozens of plants and flowers, stepping stones, and more. The book features 73 homes built between 1870 and 1910, and photos of Queen Anne, Shingle Style, and Carpenter Gothic architecture from private collections and the Mackinac State Historic Parks’ archives.