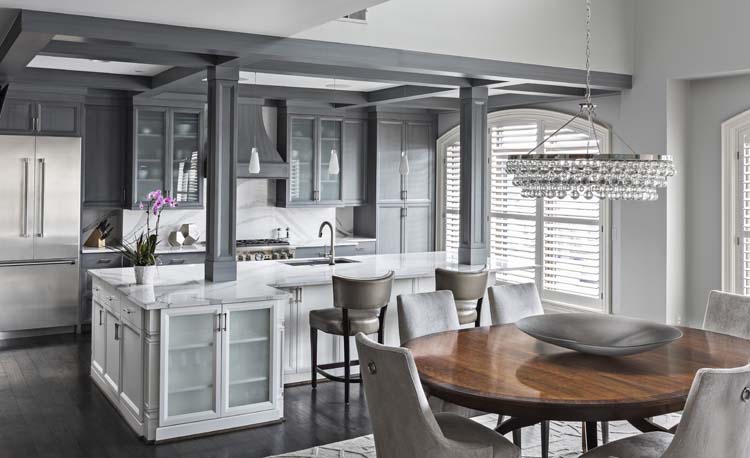 When a Birmingham woman retired last year from a job that kept her traveling all over the globe, she decided it was time to shed her home and downsize to a condo in the city’s downtown area. She wanted to find the type of place where, she says, “I could lock the door and go.”

Still active on many corporate boards, she is also a competitive ballroom dancer, so even though she’s retired, she’s busy all the time. Who wants to worry about a house?

She found a 3,500-square-foot corner penthouse atop the French-inspired Willits Building in downtown Birmingham that was exactly what she was looking for.

Although the condo was lovely, with two levels, two-story ceilings, and an exterior balcony with amazing views, the homeowner — an engineer — decided the space needed some re-engineering. “The feng shui was bad,” she says.

She called on Birmingham interior designer Julie Byrne to work on a new plan.

Before she could move, the homeowner had to rid herself of many of the belongings in her five-bedroom, full-basement home — something that was easier said than done. The home, which Byrne had helped to update, was filled with beautiful things from all those worldwide trips, plus three years in France and weekend trips to the countryside hunting for antiques. “Each piece had a memory,” the homeowner explains. Her grown daughters, though, convinced their mother it was time to pare down and move on. Byrne helped her weed things out, and worked on the new condo design at the same time.

In the condo, walls needed to be torn down, a toilet and tub had to be moved, floors and countertops needed updating, archways needed to be built, a loft had to be enclosed as a bedroom with a balcony, new lighting needed to be installed, a new kitchen and baths needed to be designed and installed, and the unit’s golden walls had to go light gray — and it all had to be completed in a very short time.

Byrne recommended Rick Kastler of Kastler Construction in Clawson as the design-build firm. “The creative dynamic between Julie Byrne, Rick Kastler, his team, and me was what made this project so successful and beautiful,” the homeowner says.

The team created something that feels very French, yet very contemporary — another transition the homeowner wanted to make from her previously traditional home.

“We started with the bath and kitchen, and it grew to the whole house,” says the homeowner, noting that the plumbing was challenging because, in a condo, you have to stick to the existing drains so as not to infringe on other tenants’ walls and ceilings. In another case, there was space for an elevator next to the fireplace, but the space looked off-center, so they extended a couple of walls. When the homeowner purchased the condo, the kitchen was walled off from the rest of the home, so they opened it up.

Byrne had the contractor change a round column by the stairs into a square column, and then cover it with the same stacked stone she found for the fireplace — Silver Alabaster Shadowstone from Realstone Systems in Troy.

Architect Tammis Donaldson of Ekocite in Royal Oak designed curved ceilings for several of the doorways.

The cherry floors were replaced with Columbia Hickory-cellar engineered wood. In the kitchen, steel-gray cabinetry from Visionary Cabinetry & Design in Clawson was paired with quartz countertops and a backsplash that looks like waves breaking on a beach.

“The framework of the kitchen, which had a coffered ceiling and molding framework, was repeated in the design of the entire condo,” says Byrne, who happily was able to incorporate a number of her client’s beloved French antiques into her final design.

“After reviewing the pieces in the existing home, I chose the cleaner lines — like the oversized armoires, which fit with the more modern vibe of the other furnishings I selected,” Byrne explains. “She needed the weight of those pieces for the scale; they counterbalance the 20-foot ceilings, the weight of the stacked stone on the fireplace, and the square column we added by the staircase.”

Byrne loves the ethereal quality of the entire condo, which is painted in Sherwin-Williams’ Light French Gray in an eggshell finish. “There’s a lush softness to the furnishings that makes you feel so relaxed in the space — velvet chairs, wool rugs, an animal throw. It’s all about layering,” Byrne says.

But, she cautions: “You have to know when to stop, because you can get carried away. We stopped at the right time.”