Dennis Vankeersblick is an honest man. Sitting at the dining-room table with his wife, Bonnie, and youngest son, Calvin, he announces he’ll be lying about everything he’s about to say. He doesn’t disappoint. “Each of us has a superpower that we don’t want to talk about,” he says without elaboration.

Well, they may or may not have actual superpowers but they do have an impressive collection of art and collectibles in their vividly colored Royal Oak home. From cereal-box toys of the 1950s to mid-century furniture, art, records, postcards, and pop-culture commodities, their home is a mini-museum of Memphis design, found objects, prized acquisitions, and a basement’s worth of random stuff and flea-market finds. “On maybe our second date, we went to an antiques store and bought a Victorian bed,” he says. “And we didn’t get married until three years later.” In other words, they’re collectors. Both of them.

And being committed collectors, they amassed an astonishing number of things after years scouring the stores, sales, and curbsides. Eventually, in an effort to have less stuff, they began selling off some of their valuables on eBay and at their Sunday booth at the Royal Oak flea market. “I was trying to get my house organized,” Bonnie says. “So I started selling some stuff — which was successful enough to allow us to accrue a lot more stuff. It’s a constant battle.”

It’s also a losing battle and one they seem happy to continue fighting — superpowers or not. 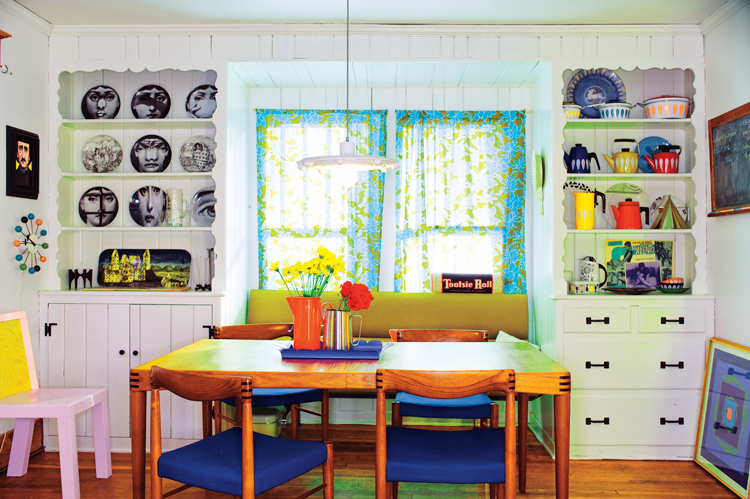 In the dining room, collections of Piero Fornasetti plates from the “Themes and Variations” series and Cathrineholm enamelware line the shelves. The light fixture is Memphis. On the wall, a painting of Edgar Allen Poe by the Vankeersblicks’ eldest son, Miles, hangs above a George Nelson clock.