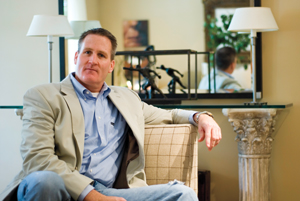 Generally, 7-year-olds don’t take a lot of interest in lighting. But interior designer Michael Coyne was the rare child that would not only change the lighting in his parents’ home but also rearrange their furniture. So it should come as no surprise that he’s been named this year’s recipient of the Brian Killian Rising Star award. After all, he’s been working since childhood.

Officially, though, his design for a contemporary condo in Ft. Lauderdale gave him the inspiration to open his own showroom. And in 2006, he did. His work — a balance of modern and classic, antique and new — showcases a smart sense of space, scale, and placement, which has attracted clients from the suburbs of Chicago to East Hampton, N.Y. “The Michigan Design Center has been watching Michael’s meteoric rise for the past few years,” says the Design Center’s vice president and general manager, Susan Zinger. “He’s a designer of great talent and he seizes every opportunity to get involved, whether it’s to design a garment for our Catwalk fashion show … or, most recently, when we worked with him on the Birmingham Showhouse.”

Whether he’s working on a master suite, large custom home, or committing his time to charitable projects, Coyne’s versatility is matched only by his desire to create a unique environment for each of his clients.