Kitchen with a Twist

This designer gets creative within the hub of her own home

BACKSTORY: Birmingham’s Katie Rodriguez gives a whole new meaning to the phrase “go with the flow.” The interior designer and owner of Katie Rodriguez Design whipped up the perfect recipe for a clever kitchen in the classic Colonial she shares with her husband, Francis, and their two boys. This distinct space was designed with the un-kitchen movement in mind. In addition to being more cohesive with the rest of the home, Rodriguez says this concept can be a more inviting way to cook, dine, and entertain.

ALL TOGETHER NOW: As Rodriguez explains, today’s popular open-concept layouts have homeowners rethinking the look of the hub of the home and how it relates to adjacent rooms. “I think there’s a desire to use the kitchen as a living space, and therefore we’re considering how it will transition into those spaces, and getting creative with materials, custom cabinets, and storage.”

SMART MOVES: For her recent renovation, Rodriguez wanted the kitchen to be the center of the home, but not the focus. “We shifted its placement from the original location, and I opened it up on three sides (leaving only one perimeter wall for cabinets) and built an adjacent walk-in pantry,” she says. In lieu of upper cabinets, Rodriguez chose a floor-to-ceiling pantry for glassware and dishes, snacks, and other essentials. The island houses a dishwasher and other storage.

A WHOLE NEW WORLD: Instead of the traditional window above the sink, the kitchen faces a spacious great room flooded with natural light from three sets of French doors overlooking the yard. “I really think the un-kitchen movement is about how you can creatively use the square footage to feel like a part of the living space. It’s providing the function needed in a way that may be unexpected,” says the designer, who describes her personal style as modern, classic, and tailored.

LESS IS MORE: Because Rodriguez likes simplicity, she opted for a smaller kitchen space. The walk-in pantry acts like a second kitchen by housing small appliances. “We’re not gourmet chefs; we don’t need a ton of space,” she says. Besides, she adds, “I don’t need two crockpots and 20 vases.”

CALMING EFFECT: The designer’s newly renovated kitchen is peaceful and clutter-free. “I think this is achieved through a restrained palette of materials and symmetrical design,” she says. “When I’m in the space, I don’t want to have to think about it. I want it to work for me with every reach, stir, and pour.”

IN THE DETAILS: RESOURCE GUIDE

A creative mingling of unique tile, art, lighting, and vanity makes for a nifty powder room in Huntington Woods

BACKSTORY: Amanda Wolfe, of Amanda Wolfe Designs and Forest Avenue Design in Birmingham, started work on a new powder room in her Huntington Woods home last July. The project was completed in November. She and her family now enjoy a larger space that pops with floor-to-ceiling tile, a floating vanity, and a concrete sink; it’s a creative mix that conveys character and practicality. Even with a bit of a Mid-century touch (Kelly Wearstler sconces that feel modern), the space is at once eclectic and inviting. “Although my house isn’t Mid-century Modern, I don’t want to walk in to a room that says, ‘you picked out all your items at one store, or from one source.’ You’re not doing a good job if you do that.”

THE OVERHAUL: Wolfe’s plan included removing a powder room located near the kitchen and renovating a back hall bathroom, increasing the size, and changing the entry so it felt like it was always there and more a part of the house rather than the back hall/mudroom. There’s now one bathroom on the first floor. 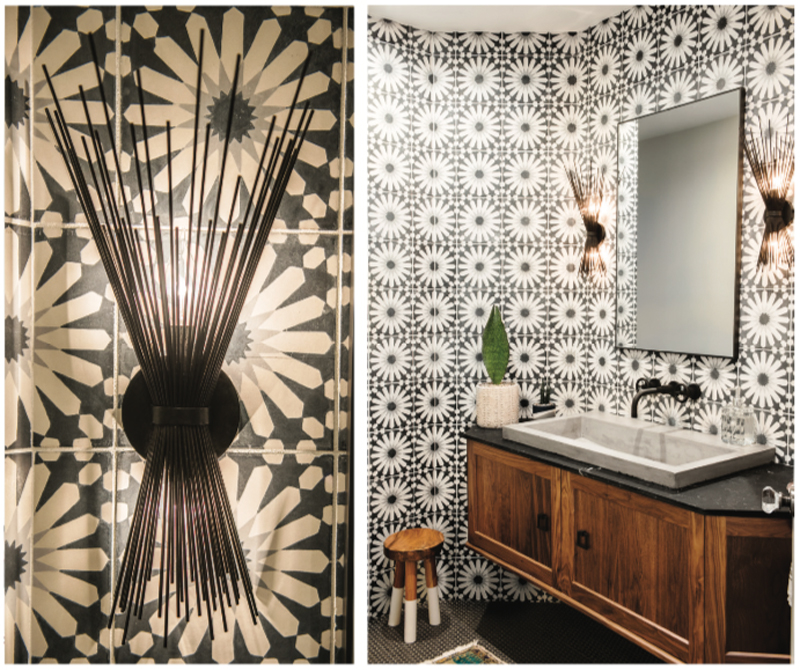 TILE CALLING: “As a designer I see so much out there, but my mind kept going back to photos I’d taken along the way of certain tiles that I wanted on the walls. I went with an Ann Sacks selection, something that I originally loved,” Wolfe says.

POWDER POP: “I had to make a pop and went floor-to-ceiling with the tile. You can do ‘wow factor’ effects because it’s a powder room, and I’m so in love with that tile.” The tile complements the flooring and its penny-round style in a graphite color.

A MATTER OF PERSPECTIVE: Celebrated cabinetry master John Morgan, of Perspectives Cabinetry in Troy, worked with Wolfe to design a floating walnut vanity. “I didn’t want anything to match. I wanted the space to feel like it’s been there forever, not newly built. The walnut vanity gives it an Old World feel, but in a contemporary way, because I floated it,” Wolfe explains. 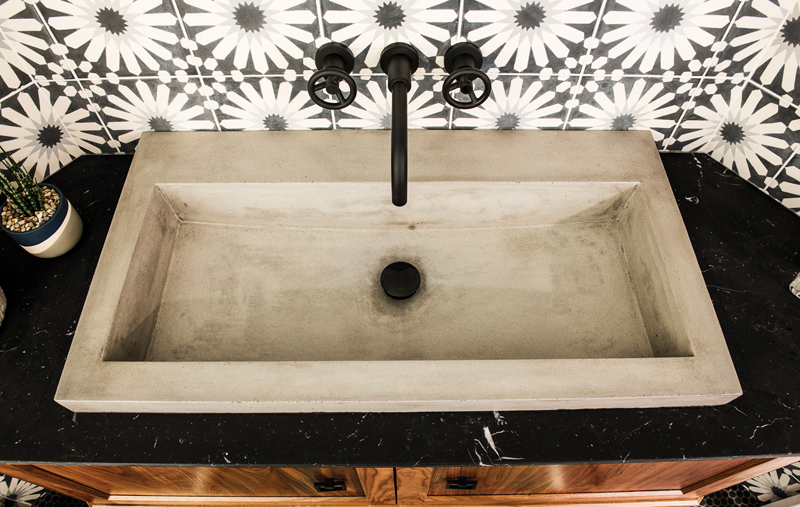 IN THE BLACK:  Wolfe chose black marble countertops. “Black marble is
underrated and fabulous, and I see it a lot in New York City, so I thought, Why don’t we use that?”

STUPENDOUS SINK: A concrete sink weighing about 300 pounds was one tough installment, but the designer says it was well worth it.

DESIGNER’S VERDICT: “I love it, and I adore the tile,” Wolfe says. “I feel like I’m in some old Moroccan town. The tile is like art.”

IN THE DETAILS: RESOURCE GUIDE