Sometimes it’s the things you don’t see that make the most impact.

For Detroit-based furniture designer and maker Richard Ganas, the unseen process that goes into his custom-made pieces is as interesting as the outcome.

“The process fascinates me the most,” says Ganas, who started the GANAS Design and Manufacturing studio last year. “I like the behind-the-scenes stuff that people don’t think much about.”

Ganas’ residential and commercial furniture designs blend the hard-edged sensibility of Detroit’s manufacturing history with the sleek lines of modern art works. Although even the most industrial-looking of his furniture pieces have a polished look that would allow them to fit into the most elegant of surroundings, Ganas seems to knowingly add hints of the process involved in making them: A large hex bolt is exposed on a birch coffee table, an I-beam winks from beneath an ash wood table, and ventilation slats built into a walnut media credenza melt into the overall design.

With each piece, Ganas says, he tries to strike a balance between  what to show and what not to show. Or, as he puts it, “Finding that perfect middle ground, I think, is my goal.”

Not only does Ganas find inspiration from the architecture and manufacturing culture of Detroit, but he knows how to make it work as functional furniture. “I like having that influence,” he says, “(and) being able to refine it so that it’s suitable for an interior.”

Starting his own business a year ago has been a homecoming of sorts for the Livonia native. After earning his degree in product design at Wayne State University, Ganas headed where 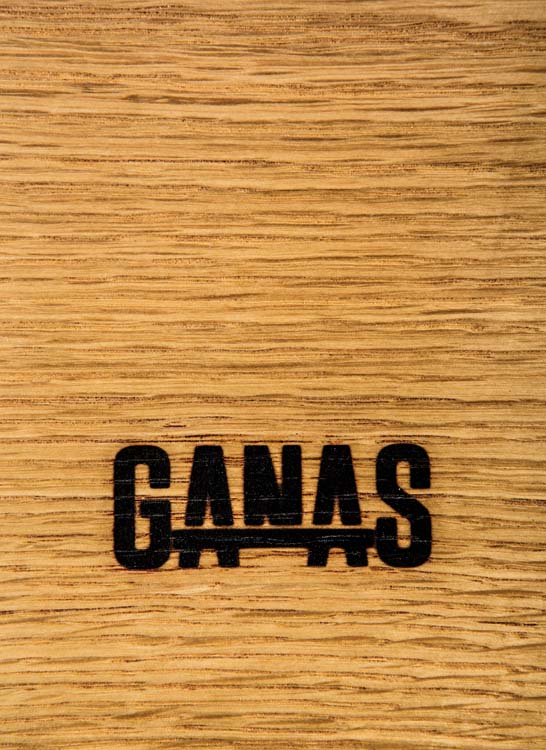 so many young creative types do: New York City. He worked for Quirky, an invention platform, as a product designer and prototype shop manager. He was good at what he did, but wanted something more.

“I always had an interest in furniture,” Ganas says, “(and) the emotional connection you have to it in your daily life. That’s what I like about furniture most — the interaction humans have with it.”

Still, in spite of the fact that he was thoroughly taken with the woodshop concept, Ganas didn’t have a clear understanding of his calling until he started making custom furniture pieces for friends and co-workers. His hobby soon caught the eye of his boss, the owner of Quirky, who let Ganas use the Quirky shop space after-hours to build some of his furniture. He saw something in Ganas — a talent that needed to be honed.

“The owner of Quirky was supportive,” Ganas says. “He sat me down and said, ‘You’re really good at this. I hate to lose a good employee, but you should think about doing it full time.’”

That turned out to be the push Ganas needed. Soon he was making his way back to Michigan, where he opened his studio at 6545 St. Antoine St.

The year has kept Ganas busier than he ever expected. Custom orders have been coming in at a robust pace, almost entirely based on word of mouth, leaving Ganas with little time to contemplate growing his business. He hopes he will soon be able to display and sell his work at home and architectural shows and expos.

For now, he’s content with the process of designing and building furniture pieces that he hopes are cherished enough by their owners to be passed down as family heirlooms. Most of his designs, he says, are based on what the customer wants from the furniture. He tries to make each piece unique and carefully crafted, without becoming too overcomplicated.

“That’s what I pride myself on,” he says, “high-quality, well-thought-out pieces that kind of speak for themselves.”