BACKSTORY: Julie Byrne and this particular homeowner have known each other for years. So when the homeowner decided to downsize to a Willits condominium in Birmingham, her first move was to get in touch with Byrne, owner of Julie Byrne Interiors in Birmingham. After assessing the space, Byrne brought in contractor Rick Kastler, owner of Kastler Construction in Clawson, to help with the challenges of renovating a condo with distinct regulations — particularly when it came to set drains, toilets, and showers. “The master bathroom had no windows, no natural lighting, chopped-up spaces, and heavy fixtures,” Byrne’s client recalls. “The master bath of the home I was moving from had multiple large windows, high ceilings, and an open floor plan, and was simply a happy space. (Because) I had been accustomed to a nice bathroom space, I wanted something nice in my new condo, as well.”

BOUTIQUE BEAUTY: The homeowner has traveled the world as an executive, and she wanted to bring some of it home with her. With architect Tammis Donaldson, founder of Ekocite in Royal Oak, Byrne set out to create a home reminiscent of a European boutique hotel, replete with a Romeo-and-Juliet balcony jutting out from a great-room loft and curved ceilings, including in the master bath.

HERE AND THERE: Because the plumbing could not be moved, the tub — which once stood where the bench is now — was elevated on a platform. A water closet formerly occupied a space next to the vanities; now, a European-style wall-hung toilet is on an opposite wall.

ATTENTION TO DETAIL: Brizo’s polished-chrome wall-mounted faucet over the tub, as well as the cabinet faucets, are from Herald Wholesale in Troy.

BEAUTY MARKS: A laser-cut aluminum bench from Homework Interiors in Birmingham is functional, while adding a soft touch to the space.

CASE CLOSED: UltraCraft cabinets from Cabinetry & Design in Clawson are bookended with a pair of side cabinets that are inset with obscured glass and lit from within. jbyrneinteriors.com

—By Lynne Konstantin
(Note: Love this bath? See the rest of the home in the feature section of this magazine.)

IN HER BIRMINGHAM HOME BATH, THE DESIGNER WANTS: Heated floors. “It gets so cold — I put them in all my clients’ bathrooms,” says Julie Byrne, at left.

A Room of One’s Own

BACKSTORY: When Shelley and Dennis Fiore moved into their Bloomfield Hills home, Shelley said, “I figured I could live with the bathroom” — but chipped flooring, an outdated countertop, and mint-green appointments called for a makeover. Enter designer Linda Shears, ASID, of Linda Shears Designs LLC in Troy. Fourteen months later, Shears’ touch (as well as that of general contractor Ilene Techner of Itec Enterprises) is evident in Shelley’s master bath (there are two master baths; one for him and one for her).

JUMPING-OFF POINT: “The color theme started from the fact that I love the idea of bronze,” Shelley says. Adds Shears: “It’s not really a dark or chocolate brown; it’s more bronze with creams.” Shelley refers to those creams as the color found “inside a malted milk ball.”

HAUTE HARDWARE: The oil-rubbed bronze cabinet hardware has an Old World look and is from Russell Hardware, Bloomfield Hills.

DAMSEL’S DAMASK: “We chose a fabulous damask-type fabric with a Fortuny look for the window treatment,” Shears says. Fabric by Pindler & Pindler: Simone, in Agate, with beaded trim in Fabricut Pleasure. lindashears.com

IN HER TROY HOME’S BATHROOM, THE DESIGNER LOVES HER: Shower. “I removed the bathtub 25 years ago when I bought the home,” says interior designer Linda Shears, shown here. “The end result was a nice, large shower with a seat.”

A European-inspired bath flows with crisp, clean everything

BACKSTORY: “I studied architecture, so my focus is interior space planning as well as cabinetry,” says Chris Jacob, designer and owner of Jacob & Co. in Birmingham. Jacob’s philosophy was perfect for the crisp and clean dynamic of this master bathroom in Huntington Woods. “The outside of the home is a very traditional Tudor,” he says, “but you walk in, and it’s super modern. We did a total renovation, gutting it down to the studs and creating an addition.”

INSPIRATION: The homeowners have traveled extensively throughout Europe, where they have picked up unique design ideas. “They wanted something they’d never seen before,” Jacob says. “We went through at least 15 designs for this bathroom; it was very intense, but it was worth it.” 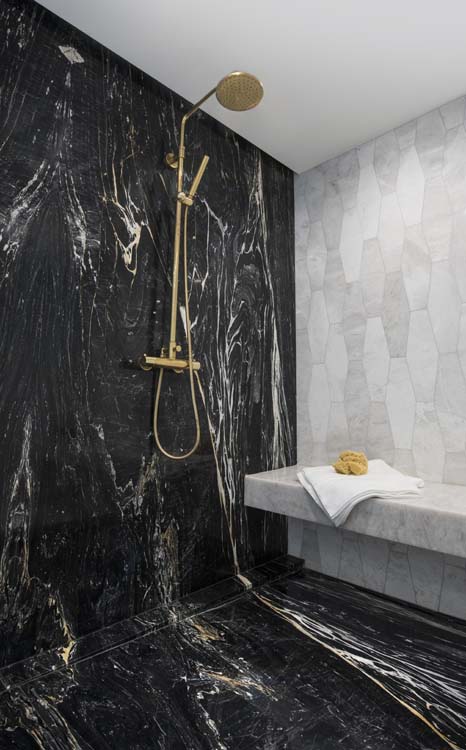 A RIVER RUNS THROUGH IT: Jacob created a seamlessness in the shower that gives the effect of water washing on the marble, and veining running down the drain. Beginning with solid slabs of Zebrino Nero black marble from CIOT in Troy, he bookmatched (mirrored) the slabs, giving the effect that they’re reflecting each other. No grout equals no seam.

PICTURE-PERFECT PLUMBING: The unlacquered brass used in the shower and sink faucets — crafted by Watermark in Brooklyn, N.Y., and ordered through Advance Plumbing in Walled Lake — “is my favorite material,” Jacob says. “It comes out of the box looking like shiny brass, but the patina dulls beautifully over time.”

MIX IT UP: The same marble used in the shower is repeated in the sinks and bridge — made by CIOT — spanning the length of the custom teak cabinetry. Slabs of Iceberg quartzite were water-jetted, then cut into a pattern and hand-laid on the wall behind the tub. The quartzite was also used on the heated floors, but cut into squares.

WATERFALL REMOTE: The freestanding sculptural tub has a remote-control filler that comes through the ceiling.

IN HIS BIRMINGHAM HOME’S BATHROOM, THE DESIGNER LOVES HIS: Shower. “I love a nice, large shower with a place to sit and relax,” says Chris Jacob.